Life Time River North at One Chicago is a luxury athletic resort and coworking destination in the heart of downtown Chicago. With over 75,000 square feet of tile installed by union members, Life Time’s facility provides unparalleled amenities to the River North neighborhood and gave BAC craftworkers the opportunity to get creative on the job.

That’s because the project demanded more than just a few tile floors and walls. Instead, it involved multiple specialty and conventional applications including tiled ceilings, mosaics, and enormous gauged porcelain tile panels (GPT). Perhaps most remarkable was a first-of-its kind installation in the U.S.: fully tiled Myrtha pools.

Going into the project, the tile setting team knew it would be one of their most challenging to date. Faced with navigating material delays, compressed schedules, atypical trade sequencing, and unprecedented installations during the height of the pandemic, the talented Diverzify crew worked tirelessly to successfully complete the high-end project to the owner’s satisfaction.

Installing a Fully-Tiled Myrtha Pool: The First of its Kind

Scott: Tell me a little about your experience going into this project?
James: It was a custom tile job from head to toe, with a total of 51 different tiles included in this project from mosaics to GPT. On day one, we were asked to fully tile a Myrtha pool, which has never been done before in the United States. That made it a historical moment, but also meant that we had no references. I knew it was a great opportunity to showcase the outstanding skill and expertise of our union tile setters and finishers here in Chicago.

Scott: What is a Myrtha pool and what is different about them?
James: Myrtha pools are a proprietary system made in Italy. They are essentially steel tubs made to move and act as shock absorbers, so there are a lot of mechanicals behind the pool walls. You’ll tend to find them in high-rise buildings, but they’re also used for Olympic and competition pools, as well as in other leisure and hospitality settings. We’ve found developers love them because they perform well and are relatively efficient and cost-effective to install. We installed tile in both indoor and outdoor Myrtha pools and tubs during this construction.
What makes them different is that they’re modular. The steel panels are bolted together and hot-rolled with PVC laminate for waterproofing. What is new and challenging about this installation is that you don't use a cementitious mortar. Instead, you have to use a urethane mortar. 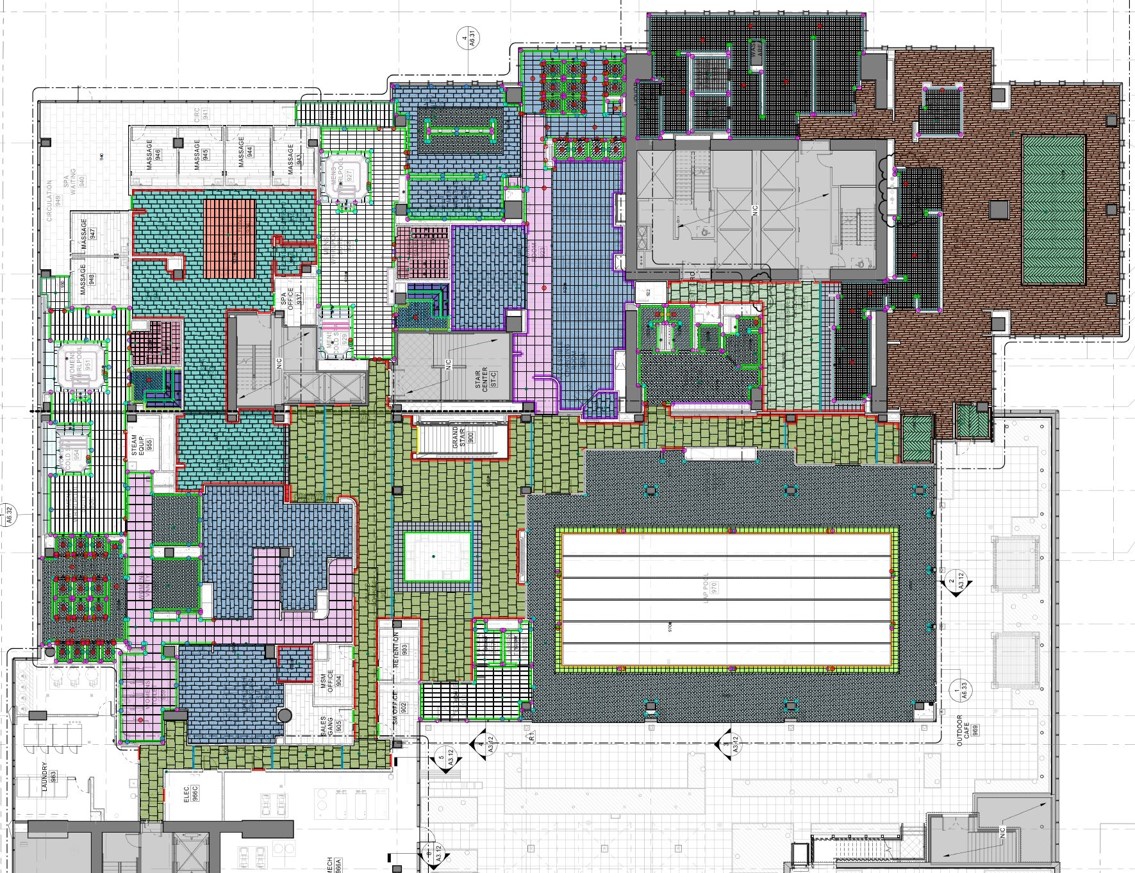 Caption: Partial plan of Life Time Fitness’s lower level The colors and patterns on this shop drawing done by Diverzify represent the 51 types of tile installed

Scott: So, you’re sticking the tile to the PVC plastic, which is basically a plastic liner. This sounds a little bit out of the ordinary.
James: Totally out of the ordinary. This was the first Myrtha pool that was completely tiled. Water lines have been done before, but never a complete tile installation. In fact, the structure of the pool was so important that it became its own project with its own job number separate from the rest of the project to document installation data.

Scott: Tell me more about the pool. What was the format of the tile in the pool?
James: That was all 2x2. We used fast-acting high-performance grout that was a little different from what we’ve used in the past. There was also a mosaic (one by one) that went around the entire perimeter of the pool, about two feet tall, like a band. That was done over steel as well and involved a very different design. What was tricky was that this all needed to be prepped with urethane, so we had to create pitch with urethane. As you can imagine that’s a little different – it’s something we had never done before. For those that know, this stuff is hard to work with. And now here we are, using it to prep and create pitch because the metal cap that goes around the whole swimming pool was back pitched and flat.

Scott: What about the deck, was it floated?
James: Yes, the deck was floated with sand and cement and reinforced with 2” galvanized wire mesh. In addition to that, we had linear drains all around the pool.

Scott: Let’s talk about the state-of-the-art spa areas and the process of bringing that to life.
James: The spas were again an all-custom and fully tiled job. We laid the recessed ceilings out for full tile. All the can lights were centered on grout joints. We had to work hand in hand with the other trades – the carpenters and electricians – to accomplish this. To achieve the client’s desired layout, we had to show the carpenters where we needed them and where their ceilings should terminate.

Scott: Is it unusual to have tile setters driving the work of other trades in the way you described?
James: Yes, it’s normally the other way around, because as tile setters we are so used to coming in after everyone has already finished their part. But for this project, we drove everyone’s work. We were responsible for where the carpenters put their doors, plumbers placed the toilets, and coordinating where the wall mounted vanities were going with the ironworkers. It was a lot on my shoulders and a lot of pressure, but it was a memorable time.

The unprecedented installations and trade sequencing weren’t the only challenges James and the Diverzify crew faced. It turns out processing the sheer volume of tile, which arrived to their warehouse largely unidentified and in waves, cut into the project schedule. Factoring in other delays, ultimately, the crew had 4 ½ months to complete an estimated 8 months of tile work.

Scott: With all the delays and shortages, how did you manage to condense what was originally projected to be 8 months of work into 3-4 months?
James: Our only option was longer shifts and more labor. We ended up with about 30 to 35 men and women joining our team. Even with the extra hands, we were pushing the envelope to get the project done.

Already on a compressed schedule, the team was tasked with adding 20 additional drains near one of the pools where concrete had already been poured at the request of the Department of Health. These drip drains collect water when patrons exit the pool and walk towards the locker room. The team promptly met the requirement, but it meant their low points and high points were both an inch higher than planned.

Scott: After it was all said and done, how many drains do you think there were?
James: There were about 60 drains in total and they were all linear drains, which required a little bit more skill than your typical square drain. Linear drains are closer together, so you must create pitch to both of those areas and create a high point in between them. We performed a flood test where we flooded the spa and let 2 inches of water sit for 24 hours. We had to get creative to make a lot of this work, make sure that they were all functioning drains, and then give them the proper pitch. We were lucky to have had the men and women of the BAC tackling this complex project.

Caption: An apprentice tile finisher puts the finishing touches on this whirlpool

Scott: Mike, could you speak to the involvement of the local union for this project?
Mike: One of the major challenges was assembling the right crew with the shifting and condensed project schedule that Jim mentioned. The demand for qualified, highly trained, and skilled tile installers is incredibly high right now. Our craftworkers are busy and we needed a lot of talent on this project. We were fortunate to work across our locals and navigate different schedules to assemble experienced tile setters and finishers.

James: I agree, our guys are the best of the best. It took a higher skill set to achieve most of this work.
Mike: This project was one of a kind and tested everyone’s skills with 51 types of tiles and just about every type of installation that we do currently in our craft, including some of the old installations that go back to the Egyptians. The joy of getting to incorporate all of these pieces into one project and have craftworkers in their 60s all the way down to a 21-year-old apprentice with their eyes wide open shows the transformation of power and knowledge. It is wonderful to see that come true on this project the way it did. We're all proud of it.

Many men and women have found a true sense of pride in the trowel trades and some as lucky as 61-year-old Mike Frogner took honor in closing out his career with such a historical project. Now retired, "Froggy" (as he is affectionately known) enjoys spending time mentoring young men and women in the tile trade to pass the torch onto the next generation of world-class hands. 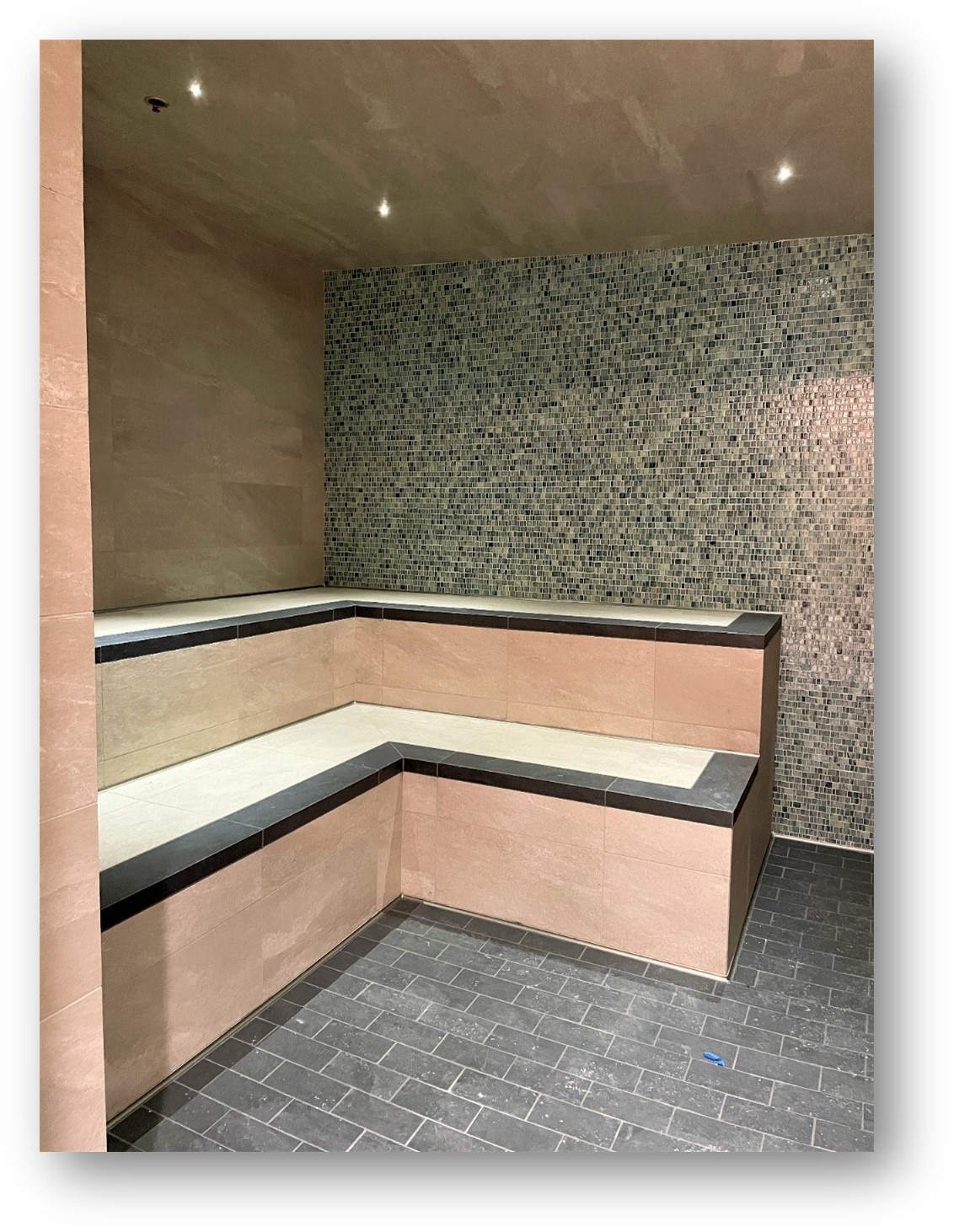 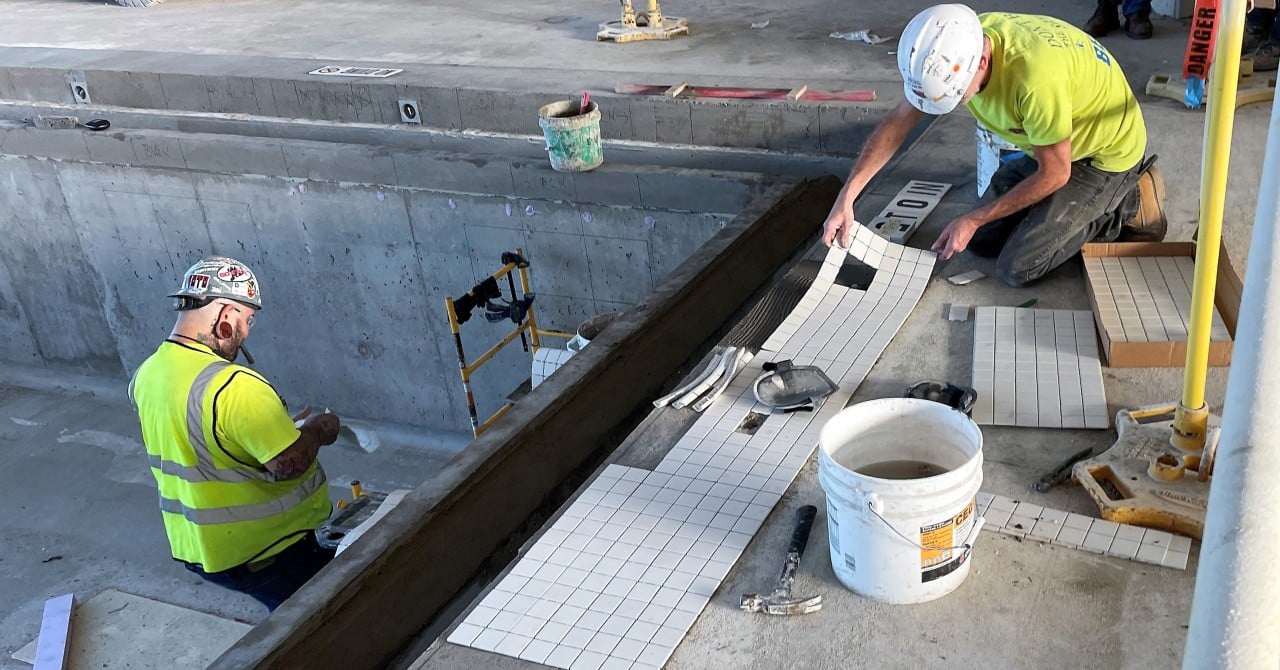 Ceramic tile is a durable material able to withstand heavy loads, high impact, and the wear that comes with decades of... 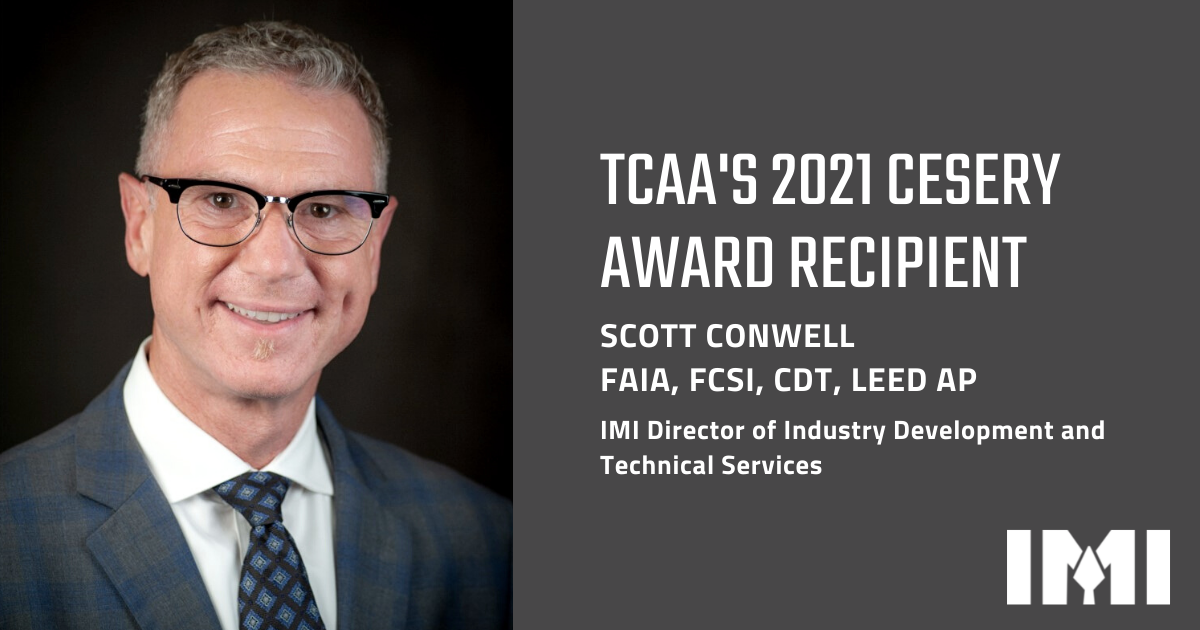