This article originally appeared in the BAC Journal (2022 Issue 2).

At Loyola Academy in Wilmette, Illinois, Bricklayers and Allied Craftworkers Union members and signatory contractors are showcasing their skills building a vibrant new center for the performing arts. 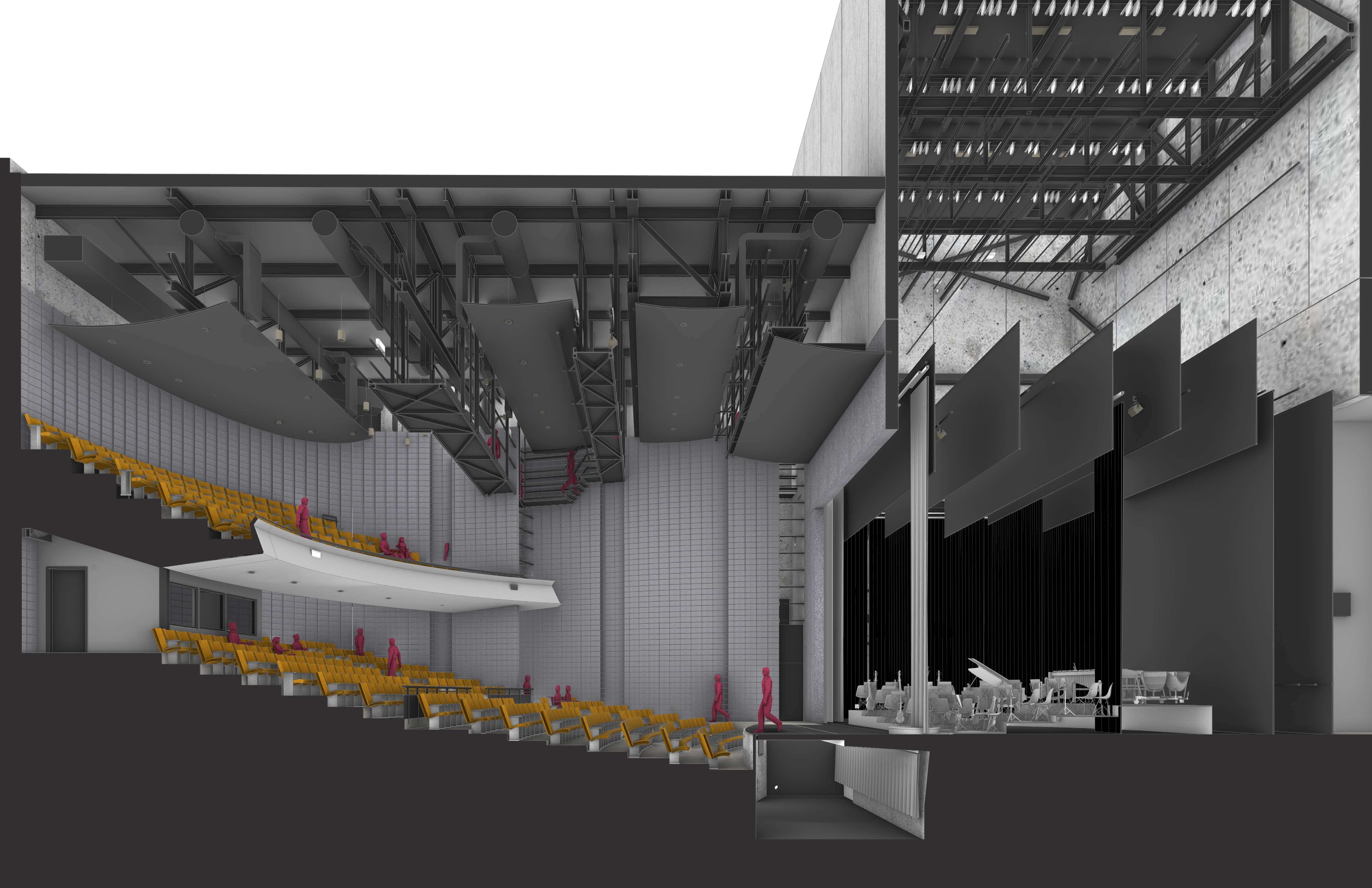 An undertaking of this scale requires close collaboration between the project team. Enter the International Masonry Institute (IMI). Jeff Diqui, IMI Director of Industry Development and Technical Services, saw a unique opportunity to bring together key project players for a hands-on day to address concerns related to aesthetics, constructability, structure, sequencing, and cost.

During the event, the team built a large-scale mock-up of the curved block wall at the District Council Training Center. Representatives from Midwest Masonry attended, along with architecture firm Krueck Sexton Partners, structural engineering firm Thornton Tomasetti, and general contractor Valenti Builders. Krueck Sexton Partners called it an “amazing opportunity” to ensure “everyone is on the same page and shares the same goals.” 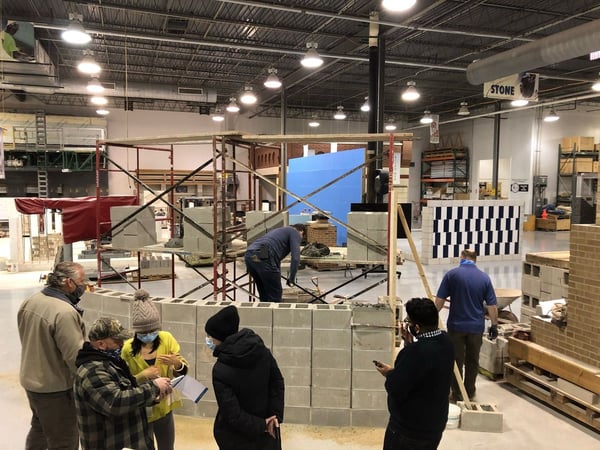 The project team collaborates to construct a mock-up of the theatre's curved block walls at the BAC ADC 1 IL District Council Training Center. 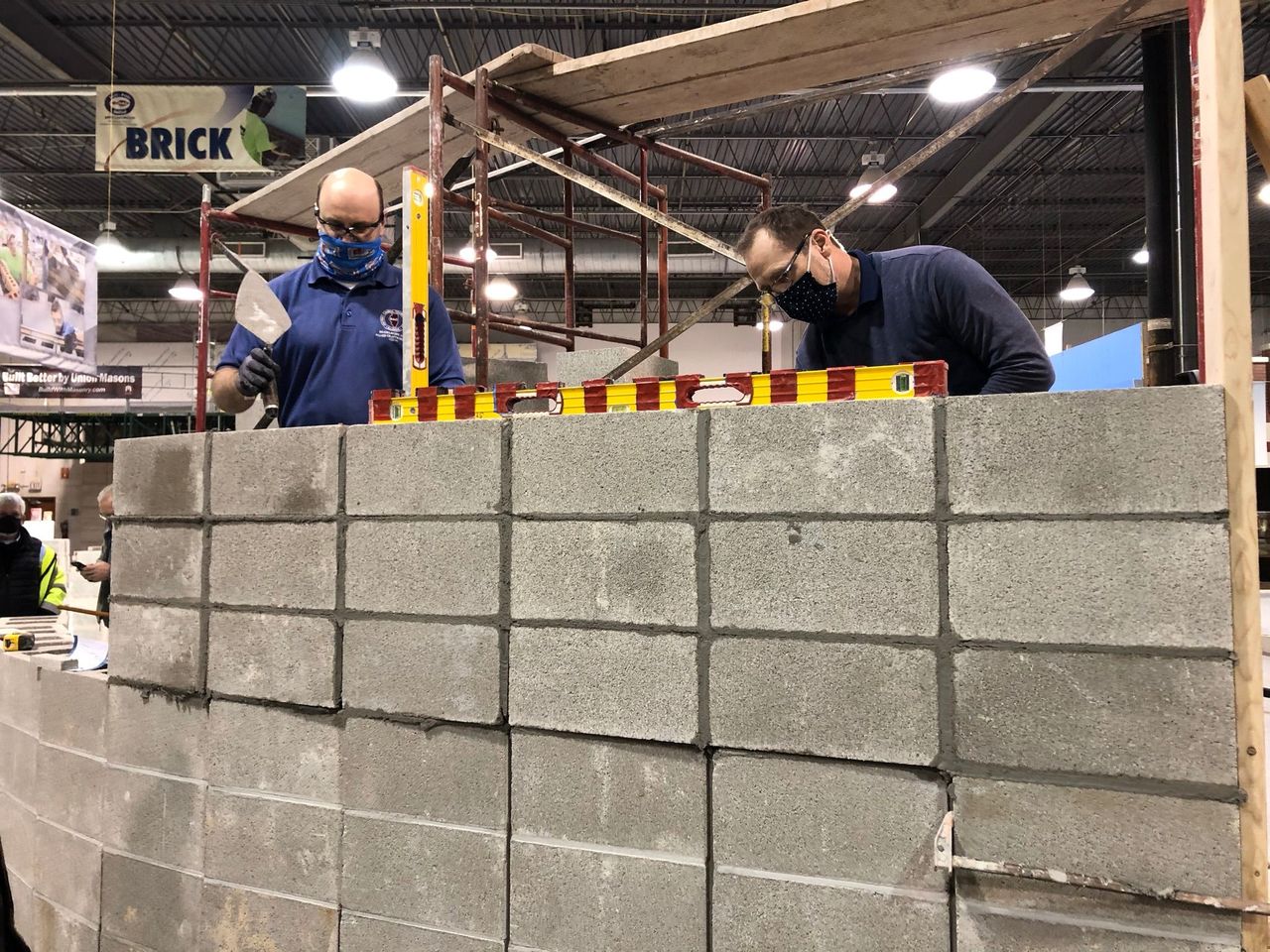 One of those goals was to make the masonry as efficient as possible. IMI and the Illinois Structural Masonry Coalition engaged Thornton Tomasetti early in the project to optimize the structural design for the auditorium. It was over budget, putting the block at risk of being value engineered out.

Diqui and the coalition supporting the engineer successfully eliminated the redundant steel columns, making the masonry loadbearing, and avoiding construction tolerance challenges where steel interfaced with block. They also reduced the size of the block units from 12 inch to 8 inch to better accommodate the curvature, improve aesthetics and minimize potential shrinkage cracking caused by overly wide head joints.

Finally, the team cut the expensive, custom horizontal joint reinforcement, designed to be installed every 16 inches. Instead, they introduced an alternate engineered method, using reinforcing steel bent to the curvature of the wall that was placed in bond beams every 4 feet on center – a simpler, more cost-effective solution that also mitigates control joints.

Mark Ligas, the project’s foreperson at Midwest Masonry, says the project was challenging, but nothing his talented crew of 8 BAC craftworkers could not handle. “The geometry of the wall was really unique. We had projections that stepped out in certain places at both 1/16 inch and 1/8 inch intervals, so counting every course was critical to avoid making mistakes. I had to make special tools to rake the joints,” he explains. That’s because the wall had varying mortar joint profiles, with both raked vertical joints and weathered horizontal joints. 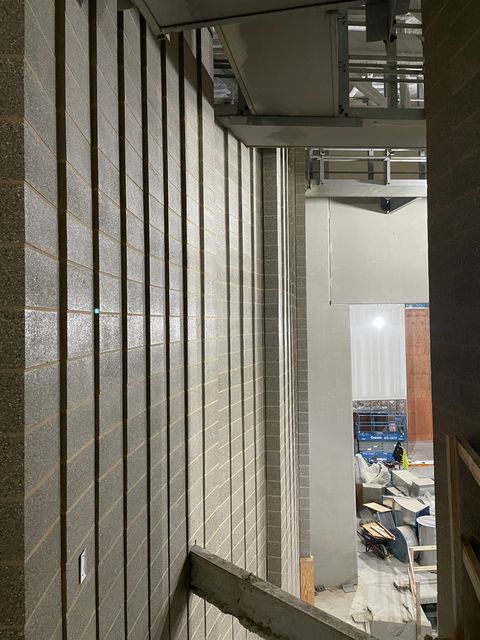 With specially cut block and multi-faced block ranging from one-sided to three-sided, every unit had a specific place. Plus, all the receptacles for electric had to be carefully cut in the middle of the block without sacrificing the integrity of the material, and in coordination with other trades. When the walls were ready for grouting, the crew had to be especially careful to avoid staining, since all the block is exposed. “We had a pep talk every morning,” Ligas says.

The block Ligas and his crew worked so hard to install provides an ideal palette for acoustics, according to Scott D. Pfeiffer – FASA, Partner at Threshold Acoustics – who provided sound consulting on the project.

“For a project that’s intended to be affordable to build, block allowed us to use one layer, rather than having to build up structure and finish separately,” says Pfeiffer. “Block is a massive material, and that makes it great for reflecting full frequency sound. Its porosity helps to keep a room’s sound warm and pleasant, rather than harsh.”

As for the curvature, Pfeiffer explains: “When we work creatively with a material like masonry, we can create curves and offsets. The broad curves are meant to distribute the energy relatively evenly across the broad space, which allows you to hear more of what’s coming from the stage.”

Ligas says the team noticed the space’s incredible acoustics as they were building. “The crew was laughing at me, because they could hear me really well from the floor when they were up on the scaffolding.”

The performance sound wasn’t the only acoustical consideration; the project team also had to address traffic noise from a nearby expressway. The precast concrete exterior, installed by signatory contractor Continental Erectors, was selected to block sound on the outside from coming in.

But the precast also played a role in meeting the school’s sustainability goals. The panels and poured-in-place concrete were made with fly ash, providing a 25% cement replacement. A C02 mineralization process further reduced the cement makeup of the poured-in-place. Together, these efforts help to reduce the building’s carbon footprint. 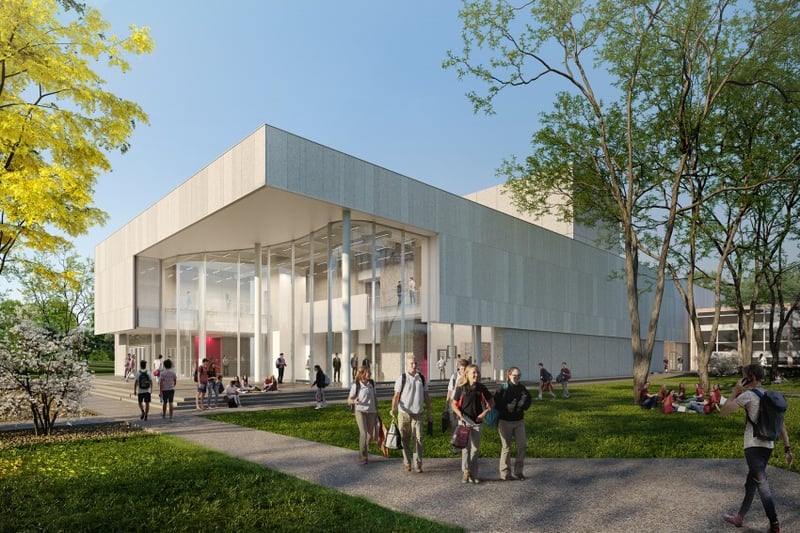 When the center opens this fall, it will be not only the heart of the arts on campus, but a shining example of sustainable, union-built construction.

“It’s rewarding to work on a project like this that will be seen by generations to come. These types of buildings are made to last,” Ligas concludes.

Structural and Non-Structural Masonry Workout for a New Fieldhouse 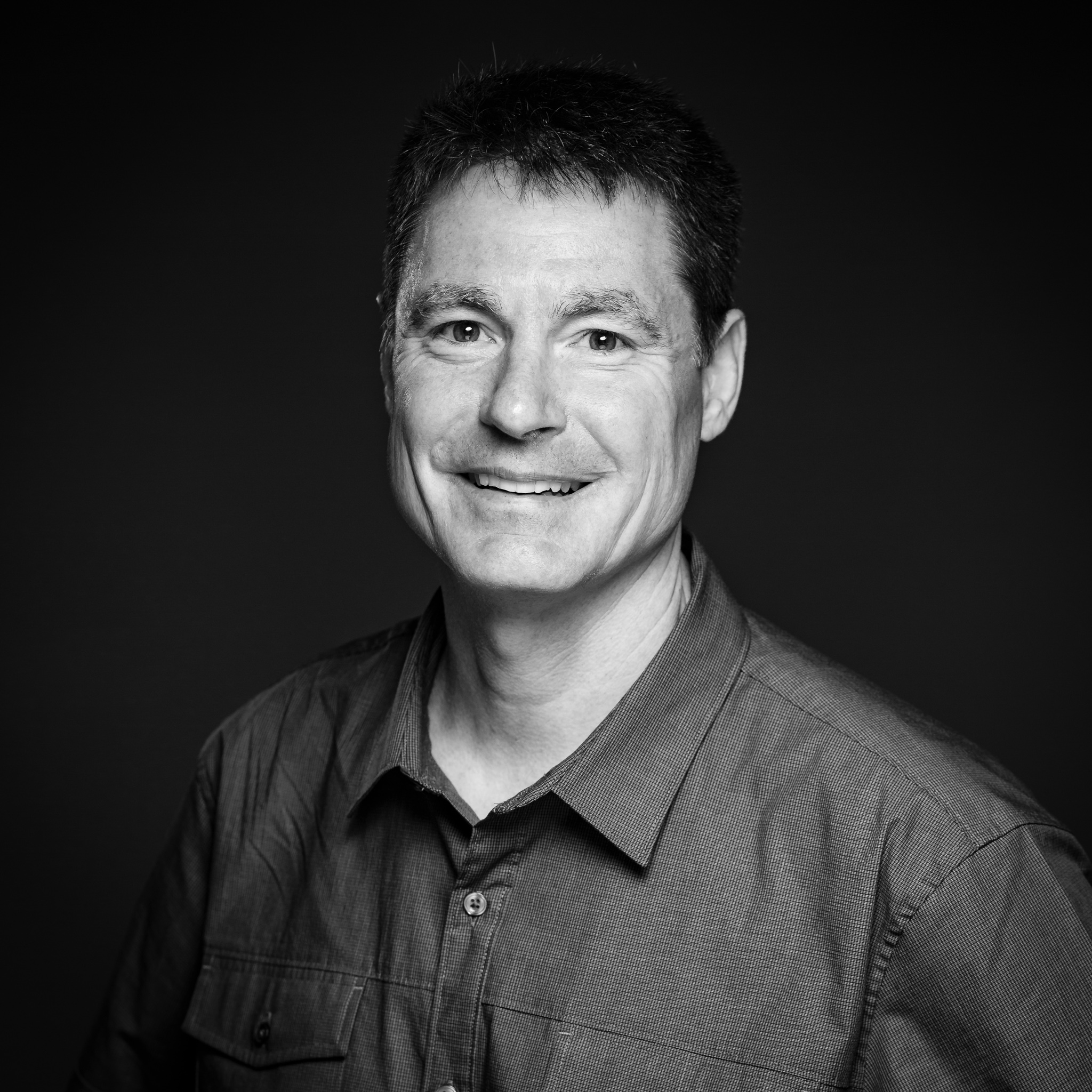